I shot this video to help explain why I bought the Netgear Orbi. I live in a 100-year old stone House and one of the problems I experienced since moving is has been an inability to get internet signal to the whole house. I’m not even talking about good signal, there were places where I couldn’t get any signal. The walls are super thick and made of brick so this has been a serious source of frustration for me. 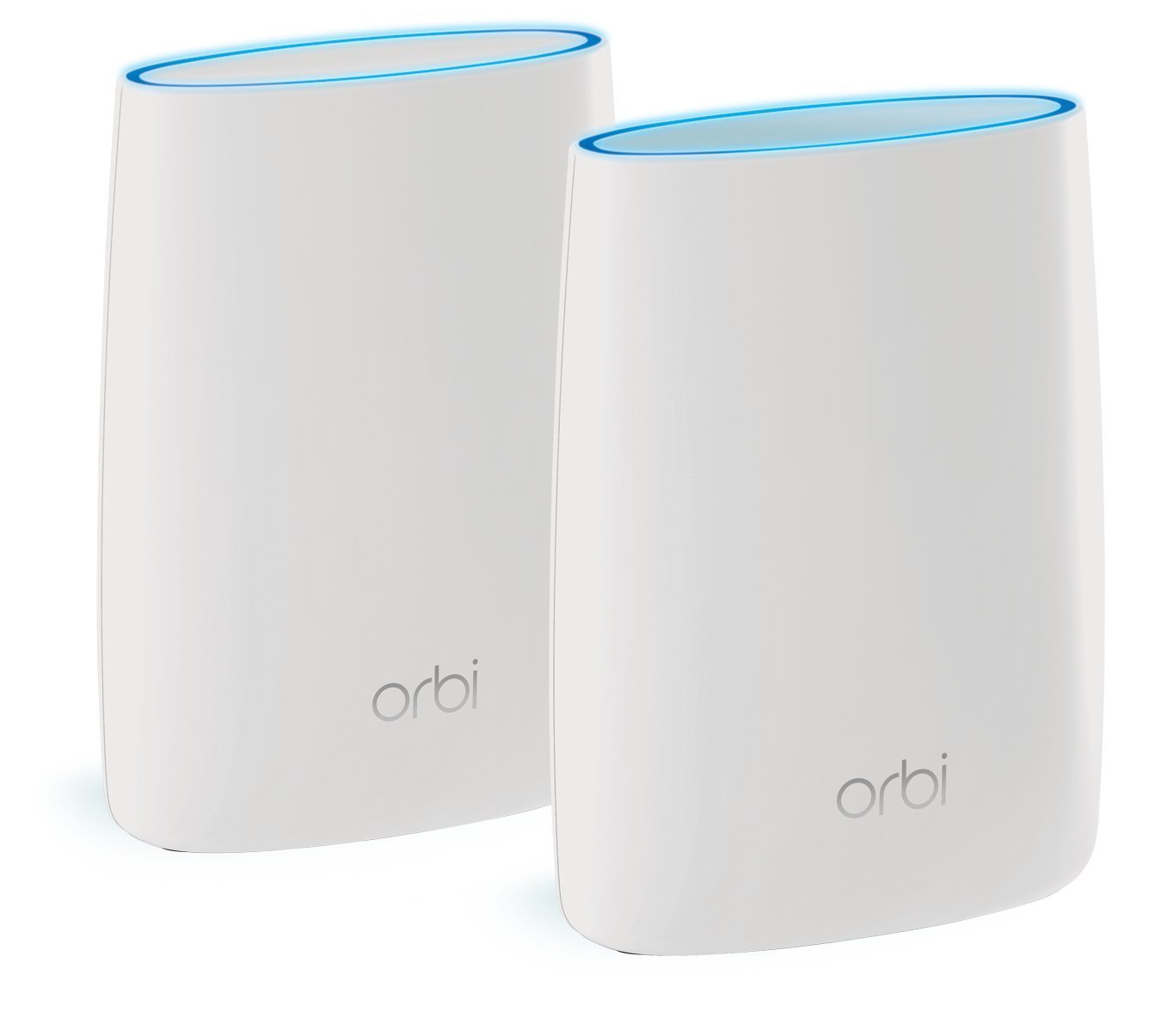 This is the kit I used. It comes with a Router and one satellite. It’s supposed to cover up to 4000 square feet but actually covered more in my case.

Get it for less than I paid

My office is in one side of the house and I had to make sure that I have full signal strength there. Unfortunately, the 2 TVs I use for streaming are on the complete opposite side of the house (as is the PS4). One TV I was able to stream to but would regularly have the awesome buffering pauses. The other TV, on the first floor, I was never able to stream to. Finally, in the areas of the basement that I actually use I pretty much had no internet signal. 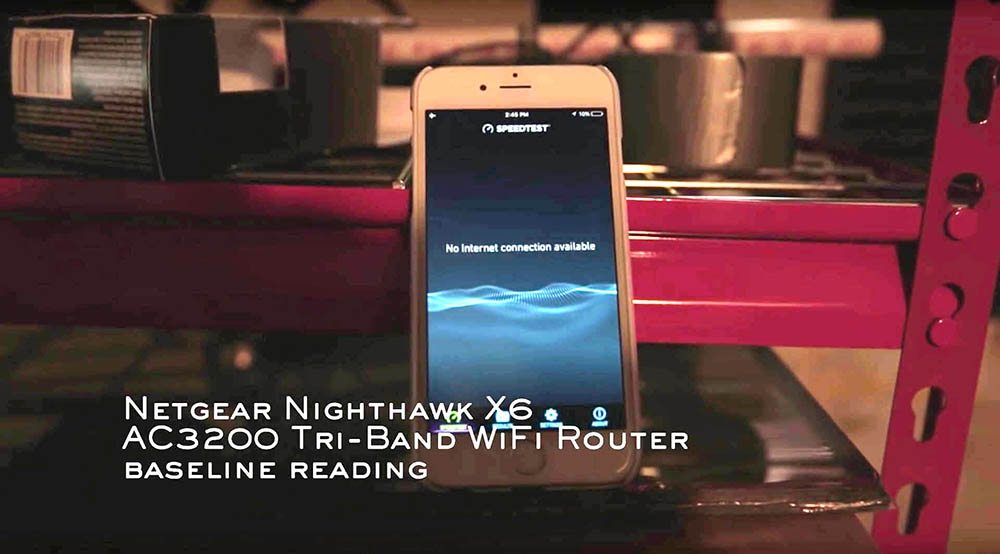 I had considered several possible solutions to my problem and unfortunately went through the time, effort and money of trying them out. 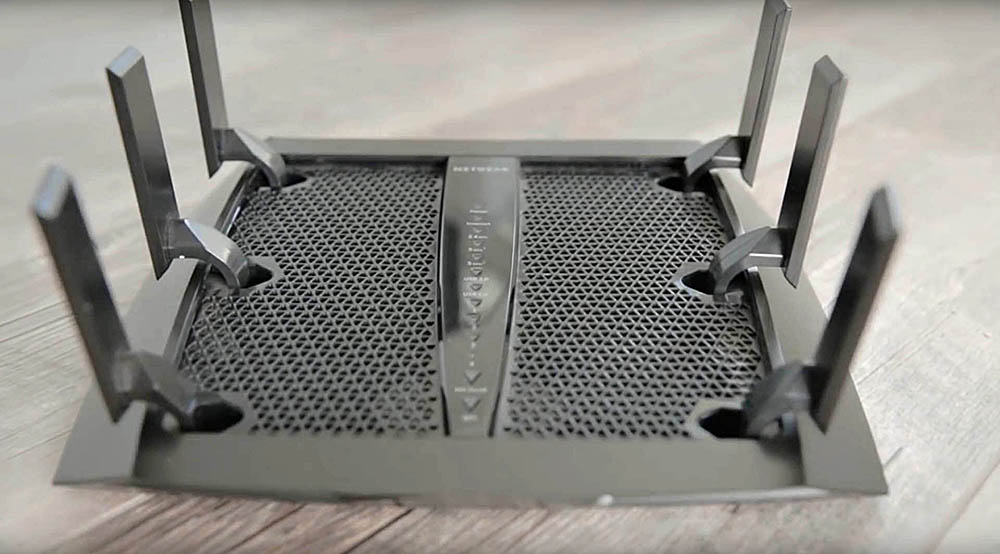 The router provided by my ISP wasn’t going to do the job, so my first attempt at solving this was to get a powerful router. I chose the NETGEAR Nighthawk X6 AC3200 Tri-Band Gigabit WiFi Router (R8000) which, at the time, was Netgear’s most powerful consumer-grade router. The Netgear X6 is a beast and was a significant improvement over the ISP’s router but this was not the right application for it. There was significant signal loss as I moved away from it and once I would go to the past the middle point of the house, I would pretty much lose signal altogether.

I was thinking of upgrading to the X8 (R8500) but wanted to try a new approach since I couldn’t imagine the new router to be “that much” more powerful.

In general, lower-frequency waves like AM radio waves can travel much farther than higher-frequency waves like light. With regards to a wi-fi setup, that’s why the 5 GHz waves used by the newest WiFi standard (802.11ac) are capable of transmitting more data at higher speeds, but are less effective over longer distances than the older, 2.4 Ghz standard.

Another option for improving the signal strength in my house was to use wireless extender. An wireless network extender basically creates another network in the house and re-broadcasts the main router’s signal. In concept, this should work, but in reality I ran into several problems.

First, the extender reduced the speed of the network. Since the signal had to take twice as many hops, the signal strength was pretty much cut in half. As an example, assume we’re using a phone over wi-fi.

Another problem was that most extenders use one band to both communicate with the router and transfer data. And extenders work sort of like a walkie talkie so they can either send or receive at any moment, but they can’t do both simultaneously. Now, pretend that you have multiple devices streaming and accessing the web at the same time using an extender and I’m sure you can see that this is not an ideal situation

Finally, extenders use a different SSID (network name) than the router which means that your device will have to disconnect from one network and connect to the other as you move through your house. This is super annoying because you may be really close to the extender but still have signal from the main router and the device will stay connected to the main router until signal is lost completely. The alternative would be to manually disconnect from the main router and connect to the extender each time. I don’t know about you, but that’s not happening.

This is a solution that I didn’t try. I do belive that this would actually work but there were too many drawbacks. First, I would have to get someone to either run wires throughout the house (which would be very expensive) or on the outside of the house (which would look ugly and still be relatively expensive). Second, if after I had this done I wanted to add another access point, I would have to go through the process again. This was a nonstarter for me. 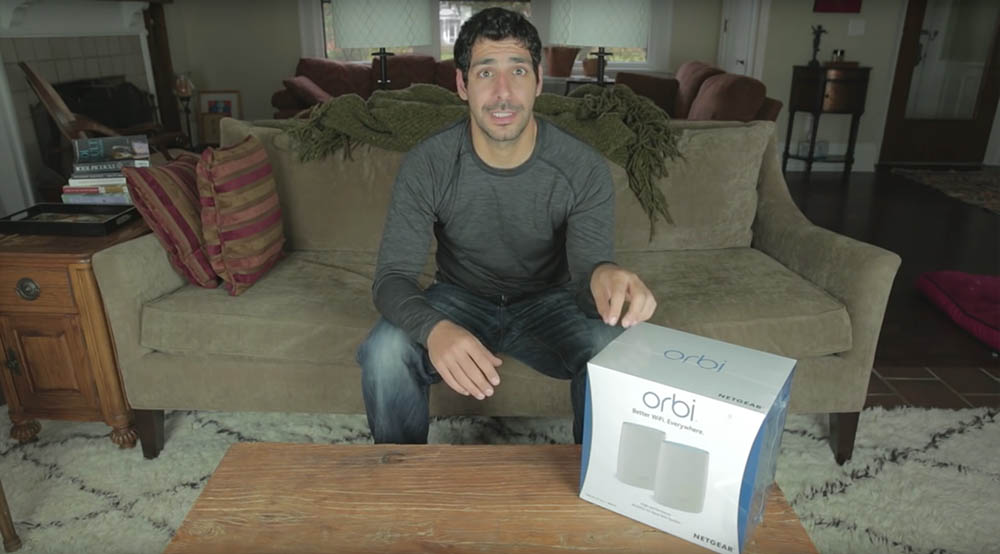 So after a ton of research I started looking into mesh networks. As I go through this next part you may think it is sounds a lot like a wireless extender setup I will try my best to illustrate the important differences between mesh and wireless extender.

Orbi provides a single WiFi network for my entire house. That means that regardless of where I am in the house I am always connected to the same network. There is never a need for me to disconnect from my main network and connect to a secondary one. This means that I know I’m always getting the strongest possible signal regardless of where I am in the house. The network itself identifies where you are in the house and selects the best wireless path for your data.

The Orbi also includes a dedicated 1.7Gbps 5GHz band solely dedicated to extending Internet speeds to Orbi satellites. This leaves other two bands free to be used the connected devices throughout my house. This Tri-band WiFi setup creates a wi-fi solution that has both reliable coverage and outstanding Internet speed throughout.

The last thing that sold me on trying the Orbi is the fact that if this system was “almost good enough” but just didn’t cover a few spots in the house, I would be able to but another Satellite unit. All I would have to do would be to plug it in and the network would automatically detect it and integrate it into the mesh. This took care of the main reason why I chose not to go with a wired access point. 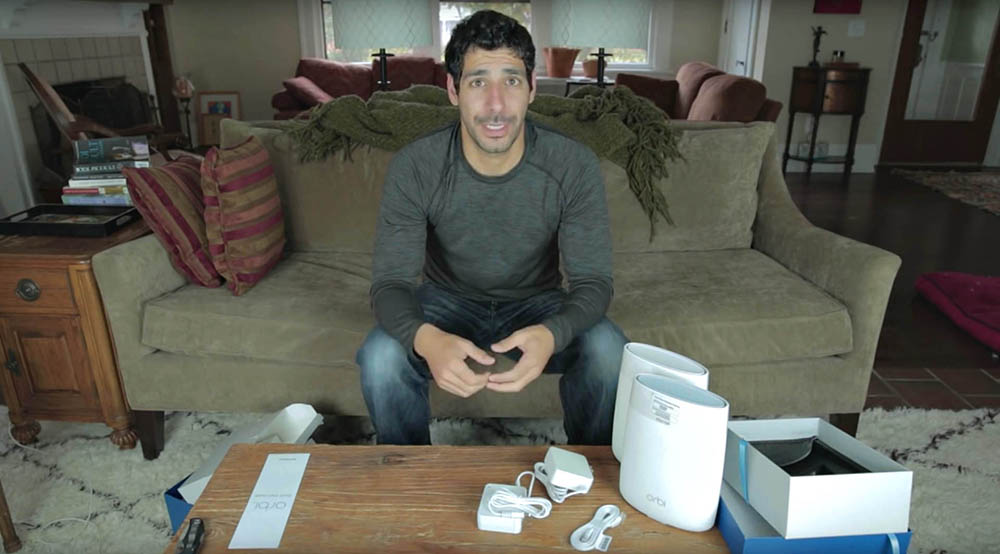 Netgear claims that the basic Orbi system (router and one satellite) can cover up to 4,000 square feet. My house is a little bigger than that so I was a little skeptical during setup. As I mentioned previously, I knew that worse case I would just have to get one more Orbi Add on Satellite. Netgear also said that no line-of-sight was needed between the Router and Satellite. I wasn’t sure if that would work with how old this house was, since the signal wasn’t just travelling through drywall but rather brick and plaster. 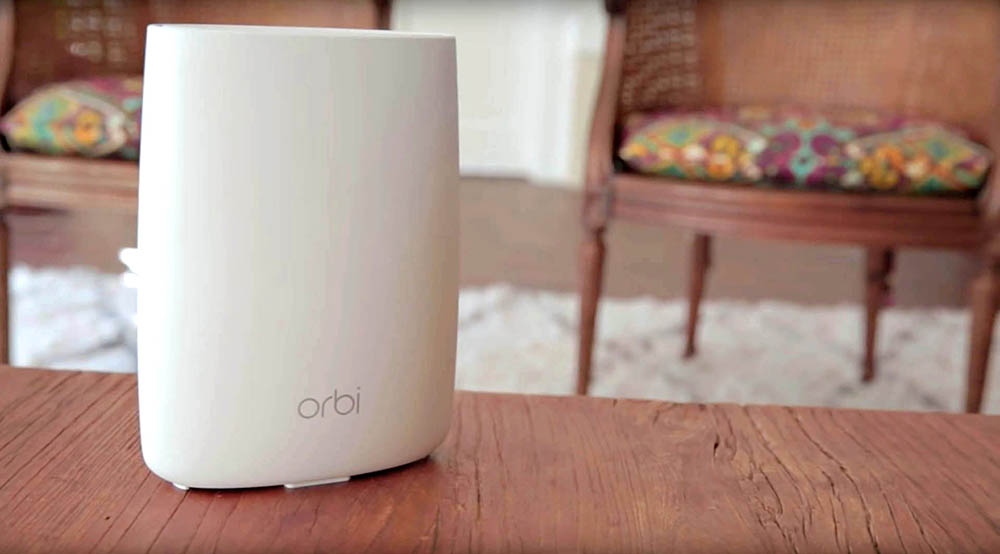 Setup was extremely simple. Just follow the quick start guide and you should have no problems. I found one omission but ultimately it was very basic and anyone should be able to complete it. Basically, the guide didn’t mention when to plug the modem to the Orbi router (answer: before turning it on).

There was one glitch in the setup process that had to do with updating firmware. Basically, after installing the Orbi router and satellite and going through the basic network setup, the Orbi tries to update the firmware on both the Router and Satellite. This step can not be skipped. The firmware for the Router downloaded but the one for the Satellite would not. This means that I was stuck. There was absolutely no way to move forward and finish the setup process with the existing firmware.

I called technical support and the first level of support was not able to resolve my issue. I did get a call back from a tier 2 support person and we were able to resolve it. I realized that what I could try was to disconnect the Satellite and only set up the router as if it was the entire system. I then upgraded the firmware on the Router. Once the setup was complete, I attached the satellite (which was automatically detected), went into the Router interface via my browser and manually downloaded and installed the firmware on my Satellite. This may sound like it was complicated but it took no more than 5 minutes. I’ve reached out to Netgear to see if they have resolved this issue. 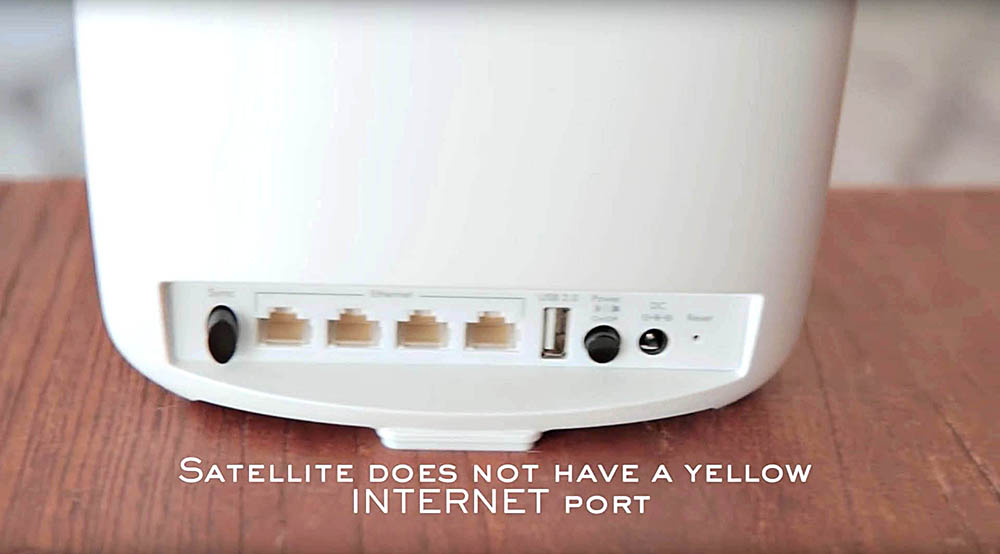 So if it weren’t for this one issue, setup would have taken about 10-15 minutes to complete but I did want to be completely honest about the whole experience.

The results are in one word, AWESOME!! I honestly couldn’t be happier with the speed throughout the house. I’ll include some screenshots of the speed test but let me just tell you that every point in the house gets a very strong and stable signal and super high bandwidth I can now easily stream video everywhere in house. In the basement where I previously had no internet connection I now get 49mbps!

I have now had the system up for a week and a half and I still shake my head at how frustrating the previous 2 years were. I now don’t even think about where I need to be in the house in order to surf or stream radio and movies. There is not much else to say, I’ll let the pictures and the video tell the story. The speed that you see on the iphone is the speed with the Orbi and in white, you will see a caption which will show you what the previous speed was with the Nighthawk X6. 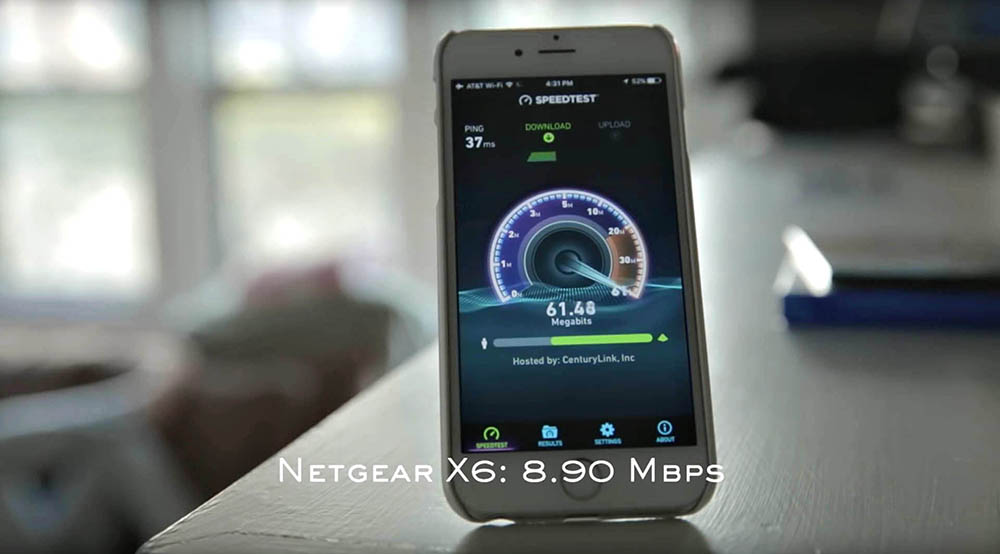 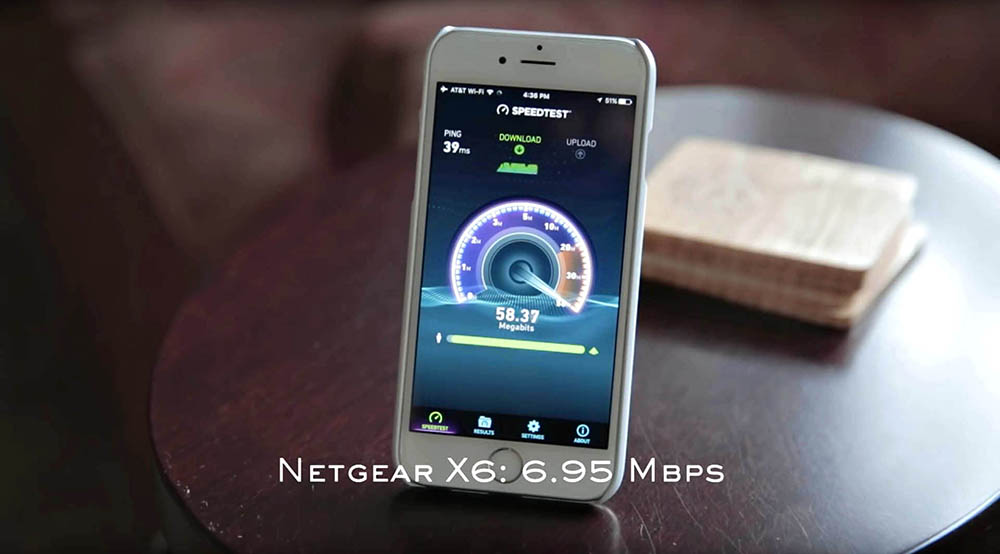 BEFORE: No Internet Connection | AFTER: 48.18mbps 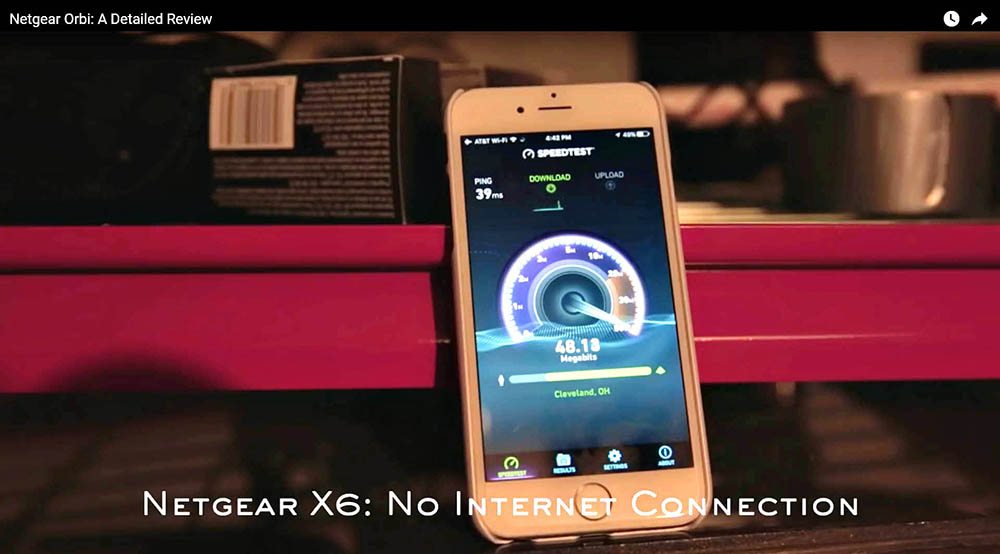 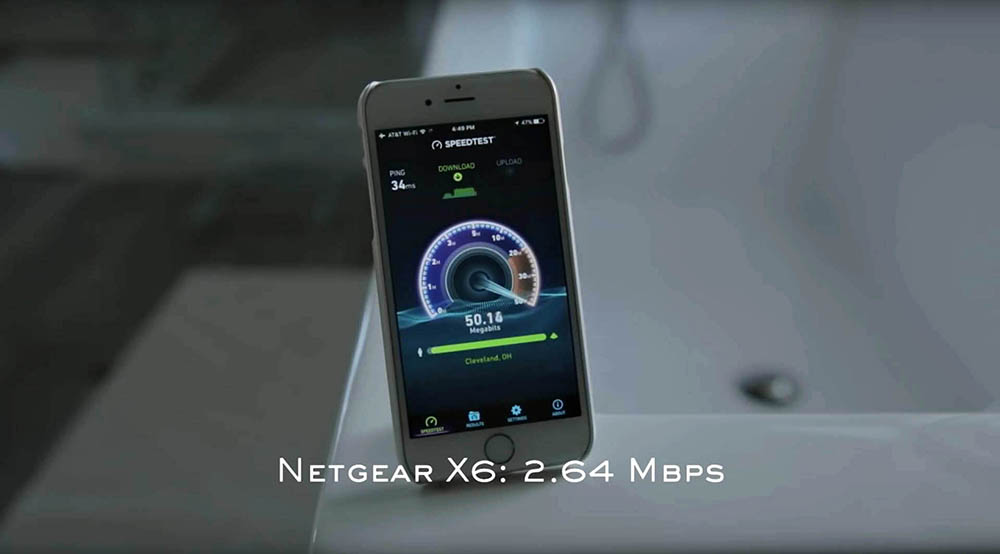 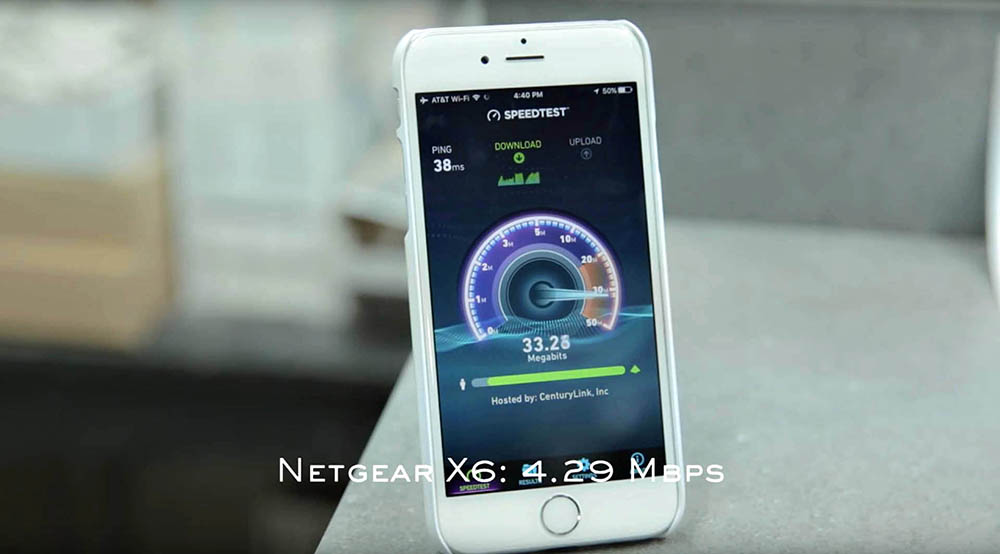 This is one of the best things I’ve ever bought. Performance is incredible and setup is very easy. The Orbi really did deliver what it promised. I know I was a little skeptical about the range and whether it would really cover the whole house but I couldn’t be happier. The cost was $400 which may seem high to some people but honestly, I’m paying a lot for 50MB and had a $300 router that wasn’t doing the job so for me it was a no-brainer. 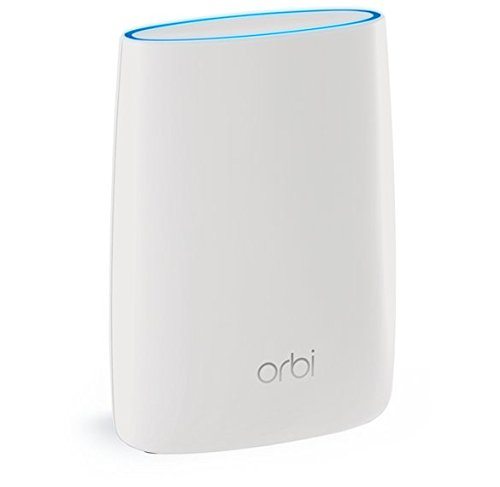 If you already bought the basic system of a router and a satellite and you still need more coverage, this is what you’re looking for. Simply get this add-on Orbi satellite and plug it in. The network should automatically detect it and incorporate it into the mesh.
Get yours now!

If you have any issues with your current router covering your entire house which can’t be resolved with a more powerful router, I would really recommend checking out the Orbi.

Check out the Netgear Orbi video at the top of the page and if you like it, please give it a LIKE and SUBSCRIBE to my channel.

And as always, if you have any questions, please ask them in the comment section below or on YouTube and I’ll usually get back to you quickly.