Today we are going to do an insane comparison of the entire line of Rode directional video microphones. There are several things that you’re going to want to take a look at when choosing a microphone to use with your DSLR or mirrorless camera and I’m going to help you pick the right mic for you! 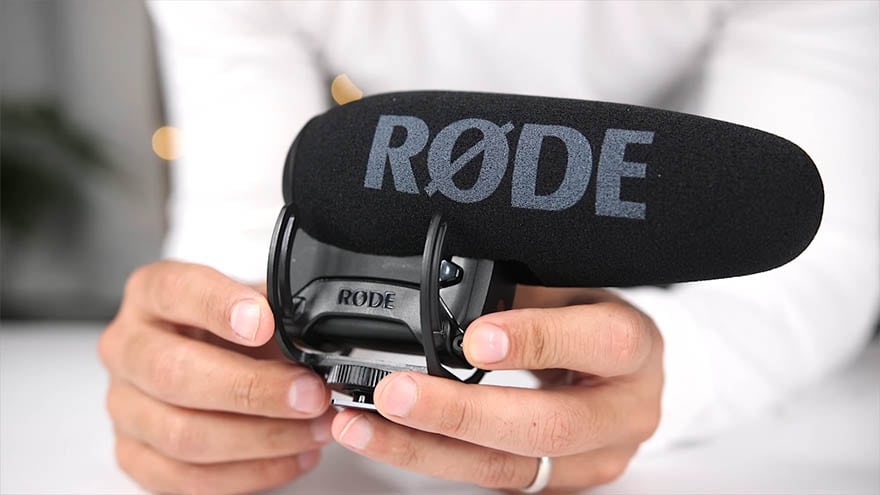 We are going to look at several of the most popular microphones on the market from Rode. And one of the things I like about Rode, other than the quality of the mics, is that they have a robust line of directional video microphones which makes it easy for everyone to find something in their price range.

I will also publish more detailed individual reviews of these microphones, so if you would like to know more about the features of each mic, please checks those out.

I’ll put some links in the description to where you can pick up any of these microphones and help support my channel for free and allow me to create more content for you. And if you find this video helpful please let me know by giving it a like and hitting the subscribe and notification buttons for more microphone and tech reviews. 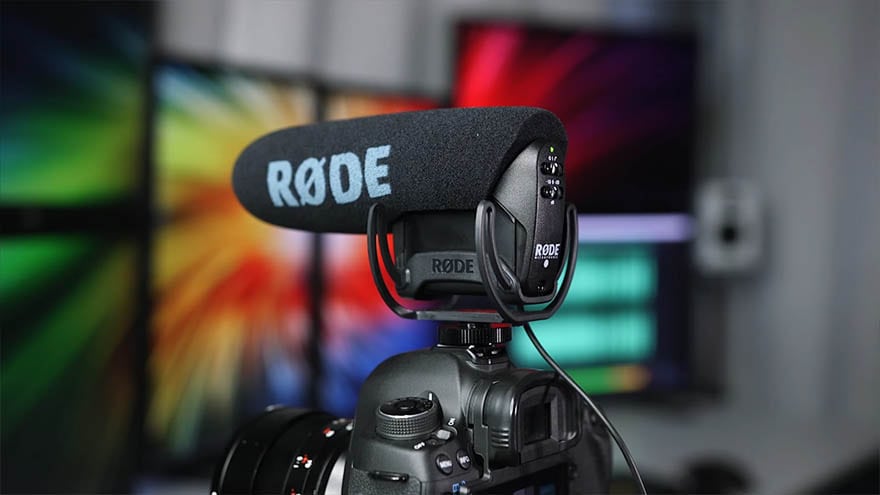 If you’re watching this video you probably know that if you have a choice, you should never use your camera’s built in microphone. When you buy a camera you’re paying for great image quality, better resolution, framereates and low-light performance, not professional audio.

And with these two reviews, I’ll show you that it’s not that one is better or worse than the other it’s just that they have different applications.

Directional microphones like the VideoMicro, VideoMic Go, VideoMic, VideoMic Pro and VideoMic Pro+ are designed to pick up sound from the front of the microphone while rejecting or reducing sounds coming from the sides and the back.

These microphones are great for dialogue and voice over applications where you want the microphone to focus on the subject and at the same time you want all extraneous sounds to be reduced. Mono or directional microphones can also pick up sound at a greater distance, again, because their pickup pattern is more focused.

Stereo microphones on the other hand, are designed to provide a more immersive and wider sound field than directional microphones. These are great for recording live events and for shooting outdoors where you actually want to capture a more true reflection of the environment rather than making it sound like everything is coming from one source. 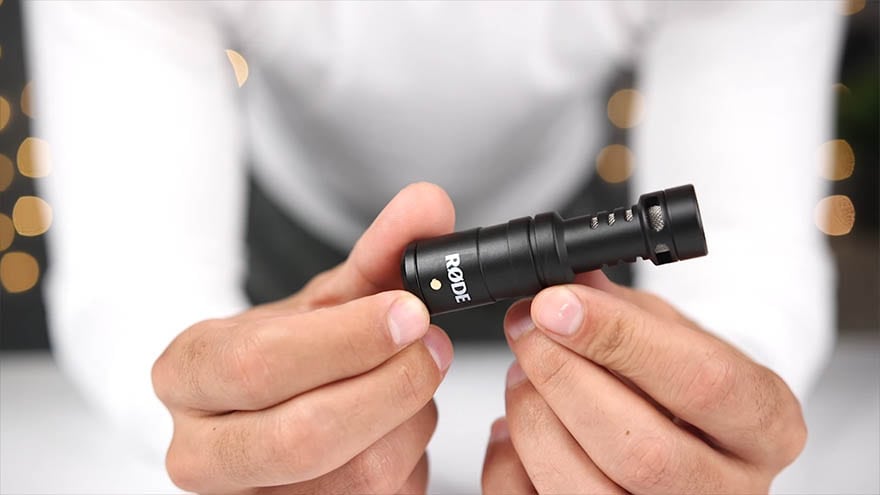 Ok, so let’s get started, the Rode VideoMicro sells for $59 and is a compact size and lightweight microphone that incorporates a high-quality cardioid condenser microphone capsule. Essentially it’s a small directional microphone and it’s the only microphone in this group that has a cardioid pickup pattern, rather than super-cardioid. Meaning that it’s a little less directional than the rest.

And I will use these graphics throughout the video to illustrate what the pickup pattern looks like. So with a Cardioid pickup pattern you can see that the VideoMicro is going to focus on the audio that is in front of the camera and help you reduce distracting surrounding sounds.

The VideoMicro is powered by your camera’s external mic input and doesn’t require a separate battery. You might look at the VideoMicro and think that it couldn’t possibly make a difference, but you’d be so wrong.

With this first directional microphone, I’ll explain how I’m going to do this test. I’ll be using a speaker that will play the same audio file for each microphone, that way I can be sure that the source is always the same. I’ll be placing the microphones about 18” away from the speaker and then recording directly into the camera. Then I will let you hear the on-camera microphone vs the Rode microphone.

So let’s start by listening to a sound sample of the Rode VideoMicro. 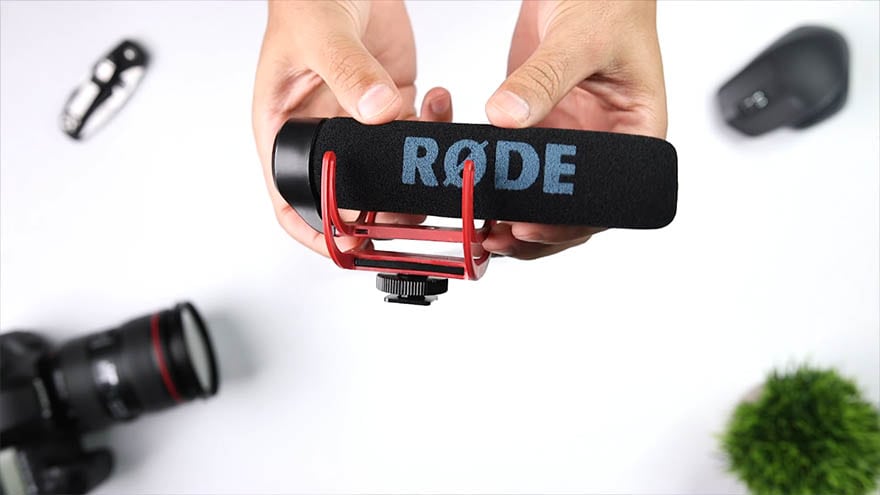 This mic sells for $99 so let’s get to the Rode VideoMic GO sound test. 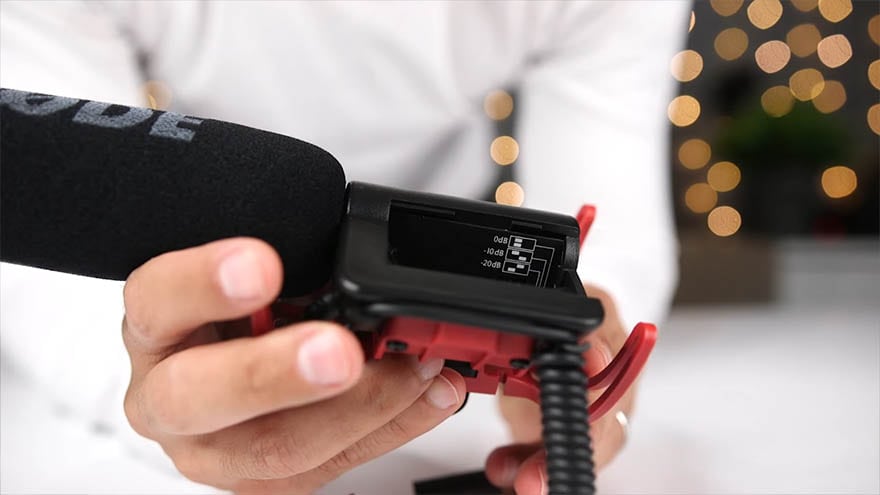 Moving up in size, we have the Rode VideoMic which is a professional grade 1/2” condenser shotgun microphone. Again, the VideoMic employs a super-cardioid polar pattern which makes it quite directional and it’s able to isolate a subject in front of the camera from the surrounding noise.

The Rode VideoMic is another great option if you’re looking up your audio game. Unlike the first two mics that were powered by the camera, the VideoMic is powered by a 9V battery. It has additional features like a high-pass filter which will help prevent low-end noise from things like air conditioners or traffic. You also have 3 position input PAD that lets you reduce the input level so that you can record very loud sources like live music. 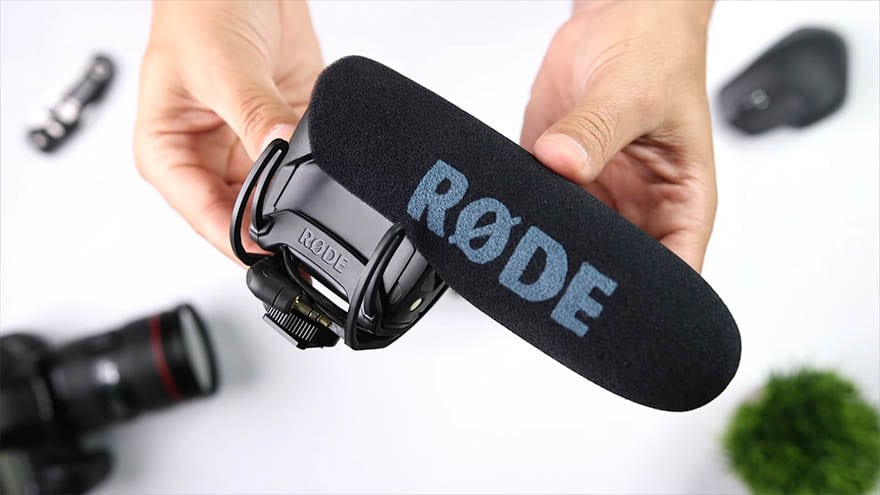 Now we’re moving up into the more professional level microphones and we’ll start with the VideoMic Pro. We have an upgraded ½” condenser capsule that Rode says provides broadcast-quality audio. The VideoMic Pro has a super-cardioid pickup pattern and very low self-noise of just 14db.

Again we have a -10db PAD for those super loud sources and a high-pass filter, but we now have a +20db boost that allows you to turn down your DSLR’s preamp level and therefore reduce the noise that is usually introduces by your camera’s low quality audio circuitry.

I know this is a lot for a microphone comparison, but essentially what we’re doing here is asking our professional microphone, rather than our cameras, to make the audio louder. And of course we should expect better results.

We’re looking at $229 for the VideoMic Pro, but if it’s in your budget, it’s definitely worth the price.

Let’s have a listen to the Rode VideoMic Pro sound test.

We’re now going to look at the top Rode’s directional video microphones, the VideoMic Pro+. This mic builds on all the great qualities the VideoMic Pro, but adds some nice functionality. We have a 2 stage high-pass filter with 75hz for things like traffic and another option at 150Hz that can be used to block sounds outside of the human voice frequency range in case you are recording in a loud environment like a mall or a conference hall.

Again, Rode included a 0, -10db, and +20db to help you select the signal strength for your particular conditions. There is an upgraded user interface and a whole host of other excellent features but I’ll leave that to the detailed review. The VideoMic Pro+ sells for $299 and is an outstanding choice for professional quality audio.

Let’s have a listen to the Rode VideoMic Pro+ sound test.

Ok so that gives you an overview of what each directional Rode microphone sounds like when compared with the on-camera microphone of a DSLR. Now let’s listen to how they sound one right after the other.

Should I Buy a Rode Shotgun Video Microphone? 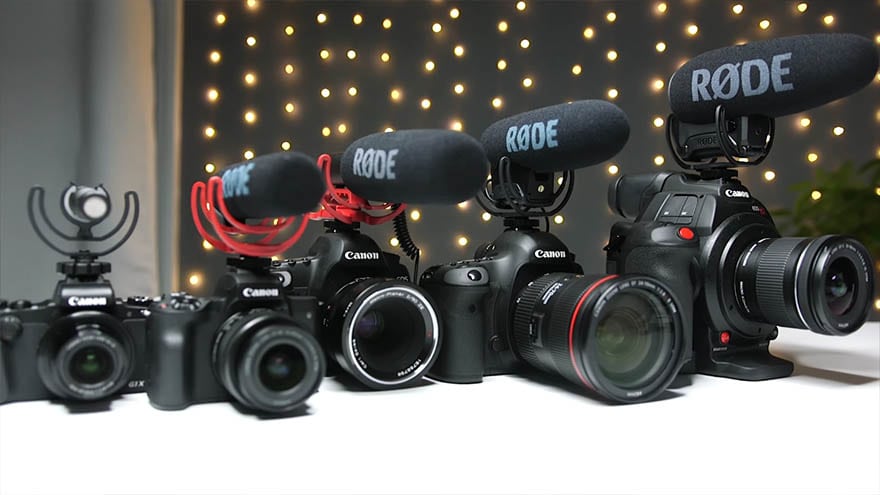 Ok, so as you can see, there are so many great options from Rode when it comes to external microphones to use with DSLRs and mirrorless cameras. The line of Rode Video Microphones starts at $59 for the VideoMicro and continues up to the VideoMic Pro+ at $299.

I promise that every one of them is going to provide you with significantly better audio than your on-camera’s omnidirectional microphone. So if you’re interested in upping your audio game, and you should be, I’ve put links in the description to where you can pick up all of these mics.

There are always specials and discounts and these links will be automatically updated with the lowest pricing.

I really hope I was able to give you a good overview of the complete range of Rode’s directional Video microphones. If I did, please let me know by giving this video thumbs up, tweet it, share it, and if you haven’t yet, hit that subscribe and notification buttons.

Good luck and see you soon.